Winners of the 2022 top World Obesity Day Awards in Europe

Organisations and individuals from four European countries have been named as winners of the World Obesity Day Europe Awards for 2022.

The awards are presented annually by the European Coalition for People living with Obesity (ECPO) and the European Association for the Study of Obesity (EASO) for activities related to World Obesity Day in Europe.

The ECPO Award for The Best Public Engagement Programme has been awarded to APCOI, Associação Portuguesa Contra a Obesidade Infantil – the Portuguese Association Against Childhood Obesity (https://www.apcoi.pt/)

The project “Fruit Heroes Augmented Reality Peddy Paper” was launched on World Obesity Day 2022 by APCOI Portugal as a mobile gaming app. It has augmented reality technology, creating a “peddypaper treasure hunt” to collect educational digital cards to engage directly with children and families through an innovative channel.

As a result, 95 news articles were published, reaching an audience of more than 850.000, and the app was downloaded more than 5,000 times from the Google PlayStore and AppleStore in the first two weeks.

More than 500 outdoor posters were placed in 55 Portuguese cities, with the promise of keeping them there for 12 months.

Mário Silva, President of APCOI, highlights: “After the success of the ‘Fruit Heroes’ initiative in schools, and the recent launch of our television show with the same name, it was essential for APCOI to take the next step to involve children and their families in raising society’s awareness of childhood obesity and, consequently, in adopting lifestyle habits that contribute to prevent obesity, a disease that one in three children are living with”. 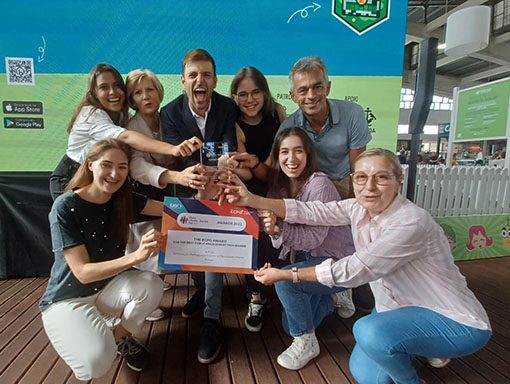 World Obesity Day Europe is a wonderful opportunity for people living with obesity to help draw attention to the many challenges they face and to call for greater access to treatment, care, and education. The members of ECPO and our affiliated national organisations are looking forward to participating and organising events again in March 2023.”

HOBS in Sweden wins the 2022 ECPO Award for the Best Patient Engagement Programme.

The ECPO Award for the Best Patient Engagement Programme has been awarded to Riksförbundet HOBS – Hälsa oberoende av storlek, (National Confederation for Health regardless of size), Sweden (https://www.hobs.se)

A video on weight stigma was produced to ask people to reconsider their beliefs and stereotype image about overweight and obesity and to support people living with these conditions. 39,811 Facebook users viewed the video.

HOBS also set up a volunteer-led support chat for people with overweight or obesity, which reached 119,496 Facebook users.

An online event was organised for the launch of a report on how healthcare workers treat people living with overweight or obesity. The report was based on a survey of more than 500 respondents and attracted more than 61,700 views on Facebook. 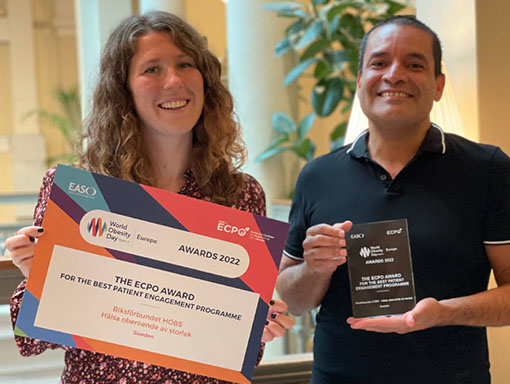 The EASO Award for the Best National Training Programme

This framework is a cornerstone of the Holbaek Model, which Dr Holm invented.

He has trained more than 1,000 healthcare professionals in Norway and more than 80% of all municipalities in Denmark and was nominated for the World Obesity Day Award by his colleagues.

The digital tools developed by Dr Holm have made this comprehensive and effective treatment model available for citizens, patients, and healthcare professionals in a professionally supervised and educating format. In addition, these digital solutions have been recently integrated into public healthcare services in Hospital and municipal settings. 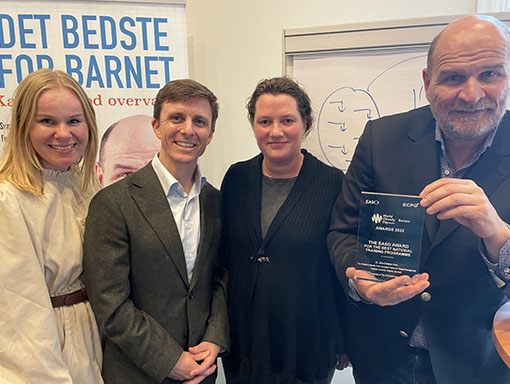 It was very challenging to select the winners from the many entries we received. There were excellent initiatives throughout Europe helping the World Obesity Day Europe campaign to reach an estimated 300 million people.”

The EASO Award for the Best Collaborative Project 2022

The EASO Award for the Best Collaborative Project has been awarded to Partnerschap Overgewicht Nederland (PON) – Partnership Overweight Netherlands (https://www.partnerschapovergewicht.nl/

For World Obesity Day Europe 2022, PON and its 19 partners created an awareness campaign featuring a high-visibility laser projection on the Erasmus University Medical Centre building, the largest hospital in the country. It could be seen from a long distance as the building faces the city of Rotterdam.

The projected text and animation were a reminder that seven million Dutch citizens are living with overweight or obesity and provided a website link to an open-access article about the many factors that can play a role in causing obesity. 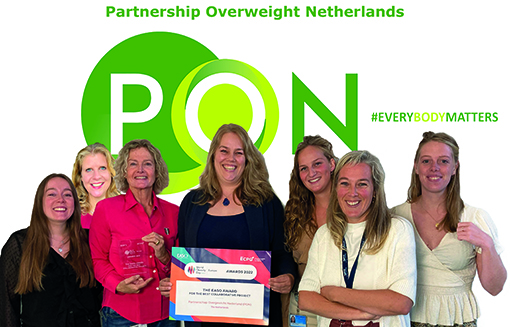